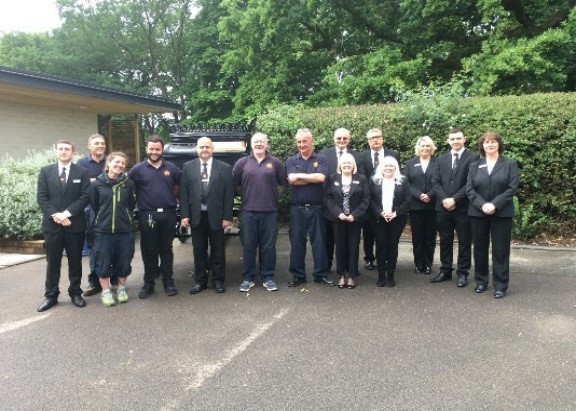 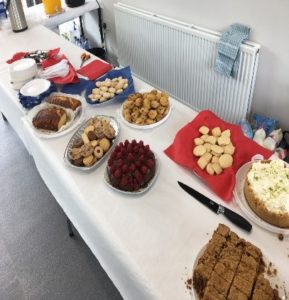 At 10.00 am on Saturday 8th June, 2019, our Open Day started, with visitors eagerly arriving before the doors had opened on our new welfare block now named – The Pavillion.  We think they heard that there were free home-made cakes provided by members of staff i.e. Joyce Robinson,  John Condon and Robert Savill.  The weather was a bit over-cast and there was a lot of trepidation as to whether it would rain, but the sun came out just in time for the garden tours.  All the staff arrived early to open up the buildings, set up the complimentary refreshment tables in The Pavillion and set out the displays – a photographic display depicting work in the grounds in the past year and some of the construction of The Pavillion, which opened in March 2019.  The sale of plants has been very popular in recent years and now has become a focal point for the visitors.  The plant sale was set up outside The Pavillion which proved a perfect back-drop for the colourful displays of roses, carnations, petunias etc., provided by Head Gardener, Peter Russell and 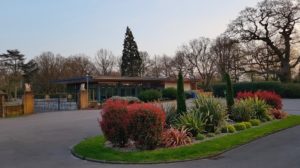 The Pavillion offers a large waiting room surrounded with glass with comfortable settees and chairs for all visitors and a full suite of toilets for men and women with a large disabled/baby changing toilet.   The building has a living roof and solar panels in keeping with the environmental and bio-diversity policies of the Crematorium.

Southall Funeral Services provided a selection of carriages and horses which were on display on the day and proved a highlight for the children and adults alike.  The horses were among the best behaved!!!

The first conducted guided tours of the building and crematory area and gardens started at 11.00.  Both tours were very well attended, the largest attendance since our first Open Day in 2008 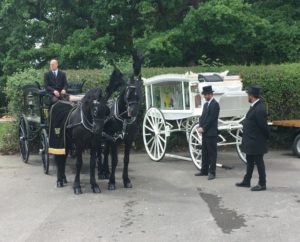 I started off the first building/crematory tour in the Ogden chapel, which is the largest of our 3 chapels seating 150, by providing a brief history and over view of how the Crematorium is managed  and the environmental issues that have to be addressed on a daily basis.  It was emphasised the great work of the Institute of Cemetery and Crematorium Management (ICCM) and their introduction of the metal recycling scheme through which the Crematorium has now donated over £80,000 to various death related charities since 2011.  It was stressed that the metals were only recycled after written agreement was received from the families of the deceased.  After my brief talk I introduced Richard Mortlock, Crematorium Technician, who conducted the crematory tours.  Richard expanded on the metal recycling process, the cremation and cremulation processes, environmental issues and abatement and security elements adopted by the South West Middlesex Crematorium by the use of ceramic discs.  The use of the ceramic discs during the cremation process, shows the individual cremation number and offers families additional confidence in that they receive the correct ashes. 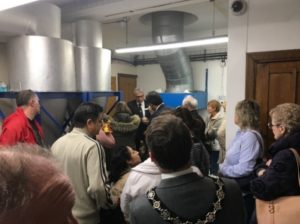 Head Gardener, Peter Russell, started off the garden tours from The Pavillion and handed out coloured pamphlets showing some examples of the trees and shrubs grown within the memorial gardens.

Peter and his team guided the visitors through the several different areas of the 11.5 acre site i.e. the traditional lawned areas, Rose garden, Woodlands, Wild garden and the newly developed area 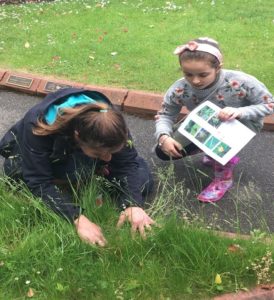 now called The Glade.  The South West Middlesex Crematorium has adopted a comprehensive recycling policy which includes all floral tributes from visitors to the gardens and the daily services.  No personal memorabilia except  fresh cut stem flowers are permitted within the memorial gardens.  All tributes are dissembled by the gardening team and put into different recycling containers, the flowers are all composted and  used within the gardens.  All metals and plastics are recycled, but the only thing we have not yet resolved is how to either recycle or dispose of Oasis in an environmentally friendly way.  There are some ornamental bee hives within the woodland area but real bee hives are also kept, which are managed by a local bee keeper who also works for a funeral director.  The bee hives are shielded from the general public for health and safety reasons and for protection of the bees.  The bees are a great source of pollination for the gardens and in turn produce honey which has now been awarded “first prize” at the Pinner & Ruislip Show.   Another highlight on the tours was the discovery of 2 rare bee orchids which had gone undiscovered in an area which had been left unmown prior to the Open Day to demonstrate different varieties of grasses. 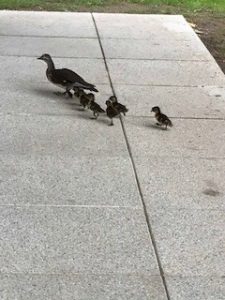 The gardening team are now keyed up for next year as to whether the orchids will re-appear in any other part of the gardens.  During one of the tours a Mother Duck and her 6 ducklings decided to leave their nest in an owl box in one of our large oak trees.  It seemed to the visitors that they had been trained to parade for the tour and proved a big hit on the day.

Between the tours a multi-faith memorial service was held in The Ogden Chapel.  All visitors to the crematorium were invited before the Open Day to submit a dedication for a loved which would be displayed on the screens.  The chapel was refurbished 2 years ago and offers 3 monitors which are used for visual tributes as part of a multi-media service provided by Viveda Limited.  The other 2 chapels are due for refurbishment within the next 12 months combined with a cremator and abatement renewal programme. 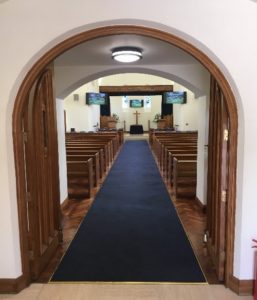 after the memorial service and found it very enlightening.  The service was conducted by Civil Celebrant Karen Hopkins and Reverend Sergiy Diduk, Church of England Parish priest for the local parish.  Apologies were received from representatives of the Sikh and Hindu communities but some music pertaining to their faiths was played during the service. 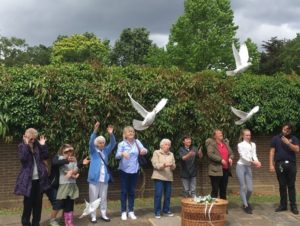 After the service a flock of Doves were released in memory of all who have been cremated at The South West Middlesex Crematorium.  Those wishing to take part were invited to step forward and hold a Dove who, after release, circled the grounds before returning to their home in Kent.  The Doves were supplied by the White Dove Company.

After all the tours were finished, the cakes and biscuits eaten, the Bee Orchids taped off for protection and the Ducks safely in their hideaway, the staff finished the clear up after receiving many words of thanks from visitors and dignitaries for all their hard work before and throughout the day.  All the staff view the Open Day a success when those attending take comfort and solace from the day and fully appreciate that all the staff do not regard their work as “just a job”, but are proud to provide a unique service to all the communities they serve.

A few comments received via email after the event

“I just wanted to drop you a line to say thank you for the Open Day.  Very interesting and educational especially the behind the scenes tour/chat.  Keep up the good work guys and thank you for caring “ D.M.

“Thank you so much for your Open Day.  I was a bit apprehensive about coming but was pleased I did.  I learned a lot and had an easier mind when I left.  I look forward to coming back next year” C.H.