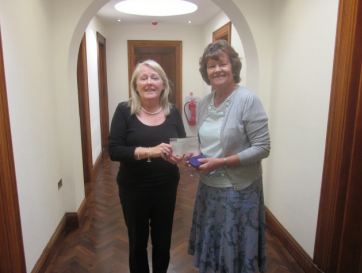 On Tuesday 19th September, 2017, Teresa Kearney, Superintendent/Registrar,
South West Middlesex Crematorium, presented a cheque for £5,000 to Surrey
North Area Cruse Bereavement Care. The charity was nominated for its
continued support to the bereaved.

Dorothy thanked the crematorium for the kind donation and confirmed it will be
used to train volunteers who provide much needed support to those suffering
bereavement.

The monies donated by The South West Middlesex Crematorium Board are a
direct result of the metal recycling scheme run in association with the Institute of
Cemetery and Crematorium Management (ICCM), aimed at making donations to
death related charities throughout the UK. Recycling only takes place with the
written consent of each bereaved family as their needs are paramount to all the
organisations involved.

Teresa Kearney said, “The Crematorium is delighted that Cruse Bereavement
Care has benefitted from the ICCM recycling scheme, as the charity offers
invaluable support to families at their most vulnerable time”